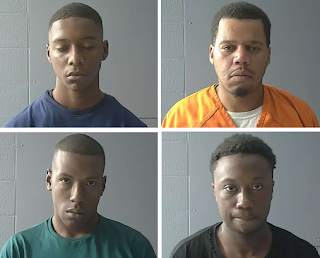 Tangipahoa Parish Sheriff Daniel Edwards reports that four Hammond residents were arrested related to a shooting that occurred on November 9, 2020, on Klien Road in Hammond. One victim was shot, needing medical attention. The victim was treated at a medical facility and later released with non-life threatening injuries.

Shortly after arriving on scene, deputies alerted surrounding law enforcement agencies of the incident and suspect vehicle description. Within moments, the Hammond Police Department located the suspect vehicle in the area of Range Road and had the occupants detained pending investigation.

The investigation revealed that around 2:20 in the afternoon, several suspects traveled to Willow Villa Road where they were captured by video surveillance exiting a newer model Dodge Charger. The suspects then appear to walk towards the Klein Road Mobile Park. The suspects are then believed to have fired approximately 15 times toward multiple houses and subjects, striking one male victim and one residence.

During this investigation, TPSO deputies conducted a traffic stop on a white sedan that was also believed to be involved in the incident. Upon making contact with the driver, deputies learned the vehicle was reported stolen from New Orleans and possibly contained several firearms.

TPSO detectives obtained a search warrant for the vehicle. During the search, detectives located a Glock .45 caliber handgun, a Glock 9mm handgun, and an Anderson Arms AR-15 style rifle. Numerous illegal narcotics were also located inside of the vehicle. Additionally, detectives were able to connect two of the three occupants to the Klien Road shooting.

During the investigation, a second shooting occurred on East Merry Street in Hammond. At this time, no arrests have been made, however, detectives believe the two shootings are connected.

Charles Pines Jr. (age 22 and of Hammond) was charged with Attempted Second Degree Murder, Aggravated Assault by Drive By Shooting, Aggravated Criminal Damage to Property, Illegal Discharge of a Dangerous Weapon, and Possession of Schedule I Narcotics.

Tavion McGary (age 19 and of Hammond) was charged with Attempted Second Degree Murder, Aggravated Assault by Drive By Shooting, Aggravated Criminal Damage to Property, Illegal Discharge of a Dangerous Weapon, and Possession of Schedule I Narcotics.

“If you have information on this case please call Crime Stoppers of Tangipahoa’s anonymous tip line at 1.800.554.5245 or visit www.tangicrimestoppers.com and click on the P3 Tips icon or Submit A Tip! Be a part of the solution and you may be eligible for a cash reward of up to $1,000! “