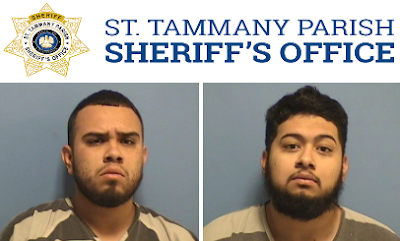 Nearly 50 pounds of cocaine was located during a routine traffic stop on Interstate 12 yesterday (November 12, 2020) at approximately 10:30 p.m. by deputies with the St. Tammany Parish Sheriff’s Highway Enforcement Unit.

Deputies conducted a traffic stop on a 2016 Ford F150 that was eastbound on I-12 near Lacombe. The driver of the truck, which was registered out of Florida, was identified as Sergio Pereyra (21) and the passenger was identified as Jose Pereyra (22). The men told deputies they were on their way back to Florida after working in Texas.

After an alert from K9 Nero, deputies conducted a search of the vehicle. During the search, they located approximately 48.6 pounds of suspected cocaine concealed inside of a luggage bag which was in a tool box in the bed of the truck. Deputies also located three tetrahydrocannabinol oil cartridges, a burnt cigarillo containing suspected marijuana residue and two small vials containing suspected cocaine residue within the inner cab of the vehicle. The men were also in possession of $3,887 in cash, which is believed to be proceeds from narcotics transactions.

Sergio Pereyra was arrested on the charges of Speeding, Driving on Right Side of Road, Driving without a License, Possession of Schedule I CDS (marijuana), Possession with Intent to Distribute Schedule II CDS (cocaine), Possession of Drug Paraphernalia, and Transactions Involving Proceeds from Drug Offenses.

Jose Pereyra was arrested on the charges of Possession of Schedule I CDS (marijuana), Possession with Intent to Distribute Schedule II CDS (cocaine), Possession of Drug Paraphernalia, and Transactions Involving Proceeds from Drug Offenses.

“Our Highway Enforcement Deputies have continued to be proactive and work tirelessly to disrupt the flow of illegal narcotics traveling in and through St. Tammany Parish”, Sheriff Randy Smith said.