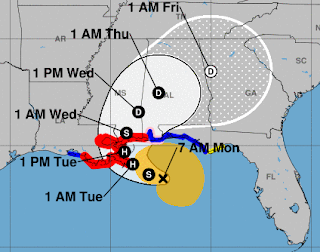 Disturbance 2. Tropical Storm Sally is forecast to become a hurricane by tonight and is moving west-northwestward at 8 mph over the north central Gulf of Mexico. This general motion is expected today, followed by a decrease in forward speed and a turn to the northwest tonight and a northward turn sometime on Tuesday.  On the  forecast track, the center of Sally will move over the north-central Gulf of Mexico today, approach southeastern Louisiana this afternoon, and make landfall in the hurricane warning area on Tuesday. Afterward, Sally is expected to move slowly north-northeastward near the northern Gulf Coast through Wednesday. Sally is likely to produce life-threatening storm surge, hurricane-force winds, and flash flooding along portions of the northern Gulf Coast starting late today.  Sally is expected to produce 8 to 16 inches of rainfall with isolated amounts of 24 inches over portions of the central Gulf Coast. Currently (7 am Monday), Sally is about 115 miles ESE of the mouth of the Mississippi and 165 miles SE of Biloxi, Mississippi with 65 mph sustained winds.

Disturbance 3. Hurricane Paulette is moving away from Bermuda and is no threat to other land areas.

Disturbance 4. Tropical Depression Rene is stationary and expected to weaken and dissipate by Wednesday.

Disturbance 5. Tropical Storm Teddy is 1250 miles west of the Cape Verde Islands moving west at 14 mph. It is forecast to strengthen as it moves across the tropical Atlantic. A turn toward the northwest is forecast by Wednesday. There are no coastal watches or warnings in effect.

Disturbance 6. Tropical Storm Vicky (previously Tropical Depression 21) is way out there and expected to be short-lived. 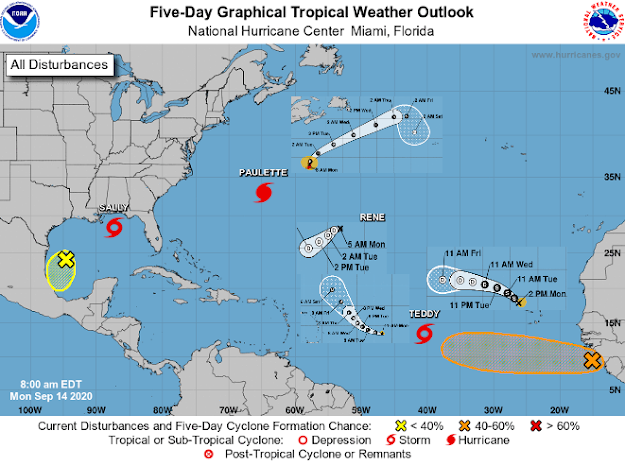