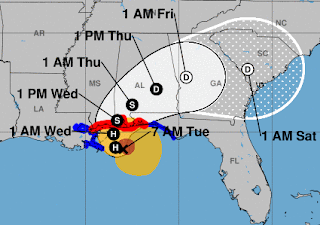 Disturbance 2. Hurricane Sally may bring historic flooding through Wednesday along portions of the Northern Gulf Coast. Sally is located about 65 miles East of the mouth of the Mississippi River and 105 miles SSE of Biloxi. Maximum sustained winds is 85 mph. Sally is moving NW at 2 mph. A northward turn is expected this  afternoon, followed by a slow north-northeastward to northeastward motion tonight and continuing through Wednesday night. On the forecast track, the center of Sally will pass near the coast of southeastern Louisiana today, and make landfall tonight or Wednesday morning. Sally is expected to produce 10 to 20 inches of rainfall with isolated amounts of 30 inches along and just inland of the central Gulf Coast.

Disturbance 3. Hurricane Paulette is located about 405 miles NE of Bermuda and has 105 mph maximum sustained winds. There are no coastal watches or warnings in effect. Paulette's strength is accelerating but rapid weakening is forecast to begin on Wednesday.

Disturbance 4. Tropical Storm Teddy is expected to become a large and powerful hurricane over the Central Atlantic in a few days. It is currently at about 1030 miles east of the Lesser Antilles and has 60 mph maximum sustained winds. Movement is WNW. There are no coastal watches or warnings in effect.

Disturbance 5. Tropical Storm Vicky is located about 500 miles NW of the Cabo Verde Islands. Maximum winds are 50 mph and movement is NW. There are no coastal watches or warnings in effect. Vicky is likely to degenerate into a  remnant low by Wednesday.

Disturbance 6. An area of low pressure is located a few hundred miles south-southeast of the Cabo Verde Islands. A tropical depression is likely to form during the next few days while the system moves generally westward. Formation chance through 48 hours is at 50% and formation chance through 5 days is at 70%.

Disturbance 7. A non-tropical area of low pressure is located over the far northeastern Atlantic Ocean and is forecast to move south-southeastward during the next few days. It could gradually acquire some tropical or subtropical characteristics this week. Formation chance through 48 hours at 10% and formation formation chance through 5 days is at 20%. 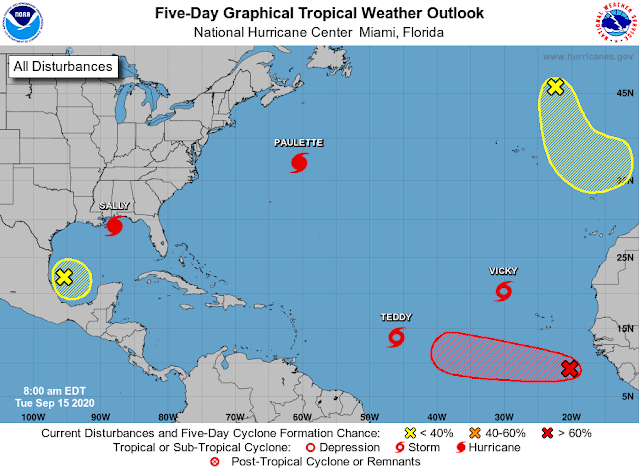