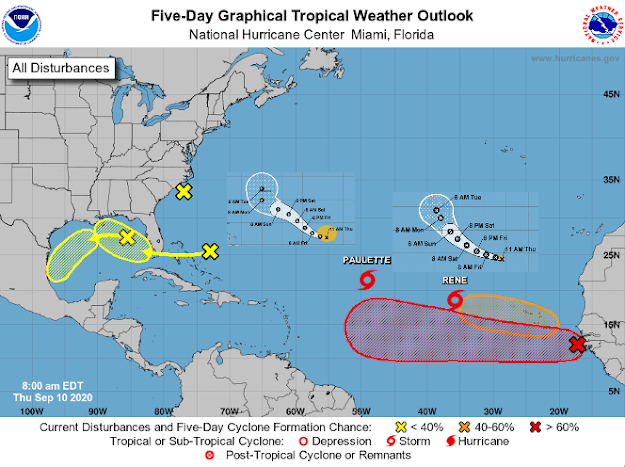 Disturbance 1. A trough of low pressure located just off the coast of North Carolina is expected to move inland over eastern North Carolina this afternoon, and therefore significant development is not expected.

Disturbance 2. A large area associated with a surface trough of low pressure is centered a couple of hundred miles northeast of the Central Bahamas and is forecast to move westward, crossing the Bahamas and Florida on Friday and moving into the eastern Gulf of Mexico over the weekend. Some development is expected while it moves slowly west-northwestward over the eastern Gulf of Mexico early next week. Formation chance through 48 hours is at 0% and formation chance through 5 days is at 30%.

Disturbance 3. Another trough of low pressure has developed over the northeastern Gulf of Mexico and some development of this system is possible while this system moves westward and then  southwestward over the northern and western Gulf of Mexico through early next week. Formation chance through 48 hours is at 10% and formation chance through 5 days is at 20%.

Disturbance 4. A tropical wave is now moving off the west coast of Africa. Gradual development of this system is forecast, and a tropical depression is expected to form by this weekend or early next week while the system moves generally westward across the eastern and central tropical Atlantic. Formation chance through 48 hours is at 60% and formation chance through 5 days is at 90%.

Disturbance 5. Another tropical wave is forecast to emerge off the west coast of Africa this weekend. Environmental conditions are expected to be conducive for development, and a tropical depression could form over the far eastern tropical Atlantic Ocean early next week while the system moves slowly westward. Formation chance through 48 hours is at 0% and formation chance through 5 days is at 40%.

Disturbance 6. Tropical Storm Paulette is weaker but expected to restrengthen in a couple of days. Maximum sustained winds are at 50 mph and moving west-northwestward. Bermuda should monitor this system. No coastal watches or warnings are in effect. Paulette could become a hurricane by Sunday or Monday. Swells generated by Paulette are expected to reach portions of the Leeward Islands tonight and Friday and will continue to spread westward to portions of the Greater Antilles, Bahamas, Bermuda, and the southeastern United States into the weekend.  These swells are likely to cause life-threatening surf and rip current conditions.

Disturbance 7. Tropical Storm Rene is moving west-northwest with 50 mph sustained winds. Rene is forecast to strengthen and become a hurricane by Saturday. There are no coastal watches or warnings in effect.