Update on Roseland Fatal Shooting - Another Arrest Made 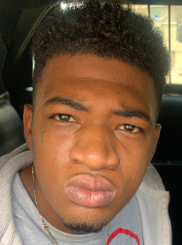 The Tangipahoa Parish Sheriff's Office reports that Jaylohn Mitchell (19) of Ponchatoula, LA. is now in custody, having been arrested Saturday (August 22, 2020) in Houston, Texas. Mitchell will be extradited to Louisiana at a later date.

Mitchell is wanted on outstanding warrants through the Tangipahoa Parish Sheriff’s Office for one (1) count of Second Degree Murder and two (2) counts of Attempted Second Degree Murder, connected to a homicide that occurred on Vernon Town Road in Roseland on August 8, 2020 that claimed the life of Zion Hutcherson (21) of Baton Rouge, LA. Three others have been arrested and one suspect remains wanted in connection with the shooting.

The Sheriff's Office would like to thank the Louisiana State Police Detective and Fugitive Task Force, Hammond Police Department, 21st Judicial District Attorney's Office, Ponchatoula Police Department and Texas Law Enforcement for helping to get this dangerous fugitive off the streets and behind bars.