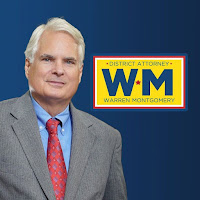 for re-election to his position, representing Washington and St. Tammany parishes as the 22nd Judicial District’s top prosecutor.

Montgomery said that when he was elected nearly six years ago, the office had lost the people’s confidence. “Since taking office, I have reformed the Office of the District Attorney,” Montgomery said. “I am proud of my work as D.A.”

Montgomery pointed to a number of his administration’s accomplishments:

· Saved Taxpayer Dollars. Montgomery supported an independent study of the St. Tammany Parish criminal justice system by the Metropolitan Crime Commission MCC), which ultimately gave his administration high marks. Montgomery also commissioned an independent study by Economist Ed Bee, who used MCC data to determine the financial impact of changes under Montgomery. Bee found that between 2015 and 2018, Montgomery decreased the time from arrest to resolution of cases by 16 percent, resulting in a savings of about a million dollars to taxpayers.


· Expanded Domestic Violence Unit. Domestic Violence accounted for a large percentage of murders in the 22nd Judicial District and the majority of murders in St. Tammany when Montgomery took office. Yet, a single prosecutor was assigned to review more than 500 cases a year without needed support. About 10 percent of cases at the time could not be prosecuted because so much time was allowed to pass before the case could be properly addressed. The Montgomery administration re-dedicated resources and built a unit of two prosecutors, an investigator, Victim Assistance Coordinator, and secretary. The unit became proactive in reaching out to victims to solidify cases against abusers and began partnering with local law enforcement agencies and community organizations to enhance victim safety. As a result, the Montgomery administration dramatically increased domestic violence prosecutions (100 per year) and decreased by 200 percent the number of cases that are dismissed.

· Created A Screening Division. Prior to the Montgomery administration, cases were inadequately screened for prosecution. Montgomery quickly realized that a key component to ensuring swift and fair justice was to fully screen cases to verify proper charges and solid evidence. Montgomery built a division staffed with four full-time prosecutors, assisted part-time by others. He entered formal agreements with law enforcement agencies on guidelines for submitting a complete case and a timetable to ensure the most efficient and successful prosecution. His team established other procedures that enable prosecutors to work with officers to identify and address possible weaknesses in each case. The Screening Division and new procedures enable the office to strengthen cases for prosecution on the front end and identify early if anyone should not be charged.

· Prioritized Victims. In 2015, the District Attorney’s Office had one full-time Victim Assistance Coordinator (VAC), who had to juggle the responsibility of keeping hundreds of victims informed about case developments each year with directing them to needed services and supporting them in court. Since that time, Montgomery has added three additional full-time VACs—one dedicated to service domestic violence victims, one serving Washington Parish, and an additional coordinator serving St. Tammany, where the case load is heavier. The Montgomery Administration also implemented new procedures that require the VACs to reach out to victims within a set number of hours of the crime. This enables the staff to be a point of contact for victims and help them navigate the criminal justice system.

· Upgraded Technology. When Montgomery took office, prosecutors did not have even dedicated work email addresses, and office files were all paper. The Montgomery team overhauled the entire system, upgrading technology office-wide. He not only provided prosecutors with secure emails, but he provided them laptops and electronic access to information from the courtroom. He invested in scanners and other technology to digitize all records, including evidence submitted from law enforcement agencies. All dockets now can be managed digitally without the need to bring paper files to the courtroom. These timely advances have given the entire office the flexibility to adapt to changing environments, such as enabling staffers to work remotely during the pandemic.

· Implemented Fair Policies/Procedures. One of the first changes the Montgomery administration addressed was the lack of clear, uniform guidelines for staff. His team created the first employee manual, laying out in detail the expectations for professional, ethical behavior. Montgomery implemented an electronic time and attendance system to ensure even treatment among employees. He established generous family leave policies to attract and keep talented, young prosecutors and other staffers. He also implemented uniform policies and procedures for prosecutions, including a system of checks and balances to make sure that all defendants are treated fairly, and justice is not reserved for the politically connected.

· Improved Community Outreach. In addition to strong prosecutions, the Montgomery administration believes in a proactive approach to keeping the community safe. To reach out to young people before they become entangled in the system, the Montgomery team established a community mentoring program at a high school in Bogalusa, located in Washington Parish. The team also created a legal education program in St. Tammany to educate middle and high school students about the criminal justice system. Montgomery also rewards the most outstanding student leaders in both parishes with a Leadership Award at the end of the school year. Montgomery also offers college internships for students interested in a legal career. For citizens who may have made a mistake earlier in life and meet state criteria to have a non-violent criminal record expunged, the Montgomery administration created the Fresh Start Program, which makes the process more affordable and convenient.
at 7/22/2020 04:53:00 PM