At the Bogalusa Council meeting Monday evening (November 18, 2019), Fiscal Administrator Joey Richard introduced the following ordinance: “AN ORDINANCE to issue a special use permit to American Dream Homes of Washington Parish, LLC for construction of condominiums allowing three (3) to six (6) multi-family units per lot of property located at West 16th and Avenue I and H, specifically Block 28, Lots 1-40, and to provide for related matters.”

The same matter had been considered at a Public Hearing held on October 15, 2019. After input from the public and much discussion, the ordinance was not approved by the Council.

However, Fiscal Administrator Richard apparently believes the matter has merit and is exercising his authority to, in effect, reverse the previous decision of the Council. Richard introduced the ordinance and, after a Public Hearing to be held on December 3, 2019, will cast the only vote to approve or not approve the ordinance. 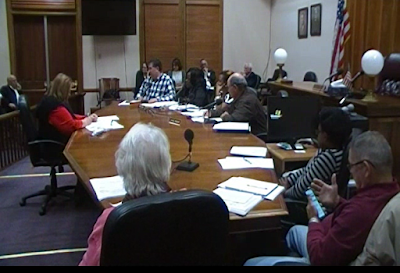 Before Richard introduced the ordinance, the Council voted unanimously to table the matter but, after much discussion, reversed that action. City Attorney Dale Branch was consulted and stated he was made aware of the matter only a few minutes before the meeting, that he did not know if the Council could thwart the action by the Fiscal Administrator, and that the matter may need to be resolved by the Court or by an Attorney General opinion.

The Council, and most of the residents who spoke, objected to Richard's actions. The objections can be summarized as that the will of the people and decision of the Council can be overridden by the Fiscal Administrator.
Mr. Richard responded to questions by residents and Council members and committed to listening to input during the Public Hearing on December 3, 2019.

To view video of the meeting, go to our Government Meetings page and scroll down to the Bogalusa Council meetings. There you will also find meetings of October 1, 2019 and October 15, 2019 in which the the matter of the condominiums is discussed.