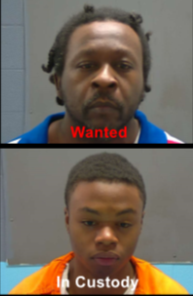 TPSO soon learned that Baldwin's burned vehicle was located by the Livingston Parish Sheriff’s Office in a wooded area off of Louisiana Highway 442. Investigators also learned that Baldwin was said to have been last seen in the company of Michael Ray “Mitch” Moore (41) of Independence. Continued investigation developed the son of Moore, Jermichael Grayer (18) as a potential person of interest to obtain information related to Baldwin's disappearance.

Jermichael Grayer was currently in custody at the Tangipahoa Parish Jail on an unrelated weapons charge and was interviewed by TPSO detectives. Grayer stated that he was present when Baldwin was fatally shot and accused his father, Michael R. Moore, of taking Baldwin's life. Investigations further revealed that Grayer and Moore allegedly traveled to St. Helena Parish where Grayer and Moore are said to have disposed of Baldwin’s body. After disposing of Baldwin’s body, Grayer and Moore traveled from St. Helena Parish to the location in Livingston Parish where the vehicle was set fire.

At 3:00 p.m. on Monday (September 23, 2019), with the assistance of Grayer, the TPSO located and recovered Baldwin's body in St.Helena Parish. St. Helena Parish Sheriff's Office and the Louisiana State Police Crime Lab were present and in charge of processing the crime scene.

Jermichael Grayer has been charged with obstruction of justice and principal to second degree murder. Detectives have obtained and issued an arrest warrant for Michael Ray “Mitch” Moore, for second degree murder. At this time, Moore has not been located and should be considered armed and dangerous. Anyone with information related to this investigation, or as to the location of Michael Ray “Mitch” Moore is encouraged to contact 911 or the Tangipahoa Parish Sheriff’s Office at 985.345.6150.