A late night traffic stop near Madisonville Tuesday night (February 19, 2019) resulted in the arrest of 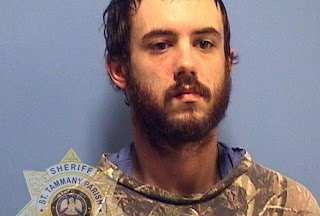 an Albany man and the recovery of a stolen pickup truck.

A St. Tammany Parish Sheriff’s deputy, who was patrolling in the area of Louisiana Highway 22 near Madisonville, conducted a traffic stop on a white Dodge Ram 1500. The vehicle had been reported stolen out of Livingston Parish.

A firearm and drug paraphernalia were located inside the vehicle. The driver, Corey Rodgers (25) of Albany, was booked into the St. Tammany Parish Jail on the charges Illegal Possession of Stolen Things, Illegal Carrying of Weapons, Possession of a Firearm or Carrying Concealed Weapon, Possession of Drug Paraphernalia, and Driving Without a License. Rodgers was also booked as a fugitive out of Tangipahoa Parish, where he was wanted for burglary/unauthorized entry.