Detective Lieutenant Raymond Myers, III, was promoted to the rank of Captain of the Criminal Investigation Division. Myers, a sixteen year veteran of the Sheriff’s Office, has served in many capacities since beginning his career in 2007 as a patrol deputy. He was promoted to the ranks of Sergeant and Lieutenant before transferring to the criminal investigation division where he served as evidence officer, detective and Lieutenant. Myers is married and the father of three children. His father, Raymond Myers, II, serves as a patrol deputy.

Hunter Creel was announced as the newest addition to the staff of the Criminal Investigation Division. Creel was a Bogalusa firefighter for three years before beginning his law enforcement career in 2011 as a reserve deputy. In 2013, he began full time service until 2015 when he transferred to the Louisiana Fire Marshal’s Office. He served as a Lieutenant of Investigation until 2021 when he returned to the Washington Parish Sheriff’ Office as a patrol deputy. Creel is the father of two children. 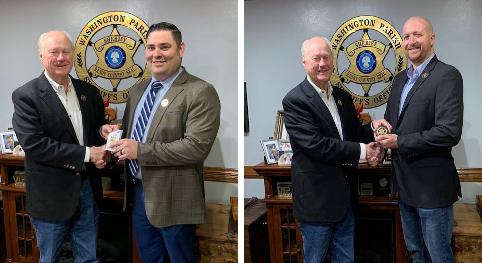 “This has been a significant day for me personally and for the Washington Parish Sheriff’s Office,” stated Sheriff Randy Seal. It is always a pleasure to promote and transfer outstanding officers. Both Raymond Myers and Hunter Creel epitomize the very best that law enforcement has to offer. They are professional officers who always demonstrate the utmost integrity and dedication to their chosen profession. In their new positions, they join other fine officers who are committed to serve the citizens of Washington Parish.”