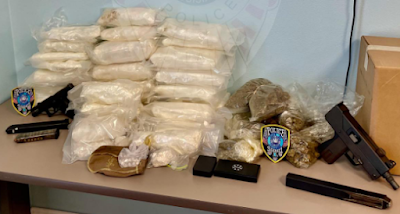 Last week, the Slidell Police Narcotics Division made the largest methamphetamine drug seizure in the
city’s history, which is also one of the largest ever in St. Tammany Parish…a total of 52.2 pounds of crystal meth (a street value of over $500,000 dollars). In addition, three firearms, fentanyl, MDMA, marijuana and crack cocaine were seized.

The narcotics were found after a search warrant was executed at a residence in Slidell. Slidell Police investigators are working closely with the Drug Enforcement Administration (DEA), who believe the crystal meth originated in Mexico, was smuggled across the border, and made its way to Slidell.

One person is in-custody and another is currently being sought by authorities. This is an ongoing investigation.