The new Bogalusa City Council met for the first time Tuesday (January 3, 2023) evening and were joined by recently-elected Mayor Tyrin Truong. The Mayor introduced Kelvin May as the new City Attorney. May then presided over the process of electing the Council's President and Vice-President for 2023.  On a roll call vote, Kenny Kellis (District D) was reelected President and Penny Douglas (Council At Large) was reelected Vice-President. See the video beginning at 5:45. New members of the Council, Tamira Moss Smith (Council at Large) and Shelby Temples (District C), joined Kellis and Douglas and the other reelected Council members: Gloria Kates (District A), Danielle Keys (District B), and Mark Irvine (District E). 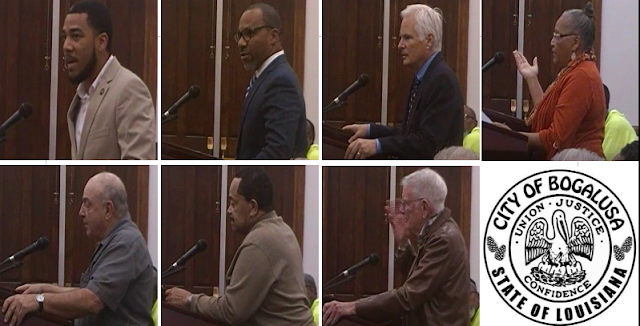 Later in the meeting, Mayor Truong introduced other members of his staff: Teddy Drummond (Senior Advisor), Collie Burnett (Chief of Staff), and Victoria Grant (Deputy Chief of Staff and Acting Personnel Director). The Mayor indicated that the name(s) of those to serve in other positions would be forthcoming.

District Attorney addressed the Council, beginning 9:20 into the video.

The Council took up the Agenda, beginning at 12:30 into the video, and

During Public Participation, a number of residents addressed the Council, beginning at 1:15:10. Issues included the Bogalusa Crime Commission, work crews disturbing residents and damaging streets, progress on the halfway house and methadone clinic, the need to cleanup the City, the need to maintain the cemeteries, and action or inaction by the Planning and Zoning Commission.