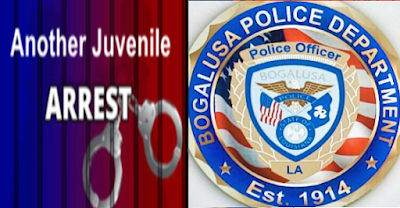 The Bogalusa Police Department reported this morning (January 13, 2023) that they arrested a second juvenile on Thursday (January 12, 2023) in connection with a shooting on January 5, 2023 that occurred in the 1300 block of North Avenue. BPD Detectives were actively looking in a residential neighborhood for a second juvenile subject in the shooting and  located a group of juveniles walking on the roadway. They determined that one of the juveniles in the group was wanted in conjunction with the January 5th shooting. The male juvenile was apprehended without incident, transported to the Bogalusa Police Department, and later transferred to the Florida Parishes Juvenile Detention Center for housing, pending a 72 hour court hearing.

A 16 year-old female juvenile was previously arrested in connection with the shooting which caused damage to two vehicles, a residence, and Central Elementary School. Motive for the shooting is not known or has not been made available.