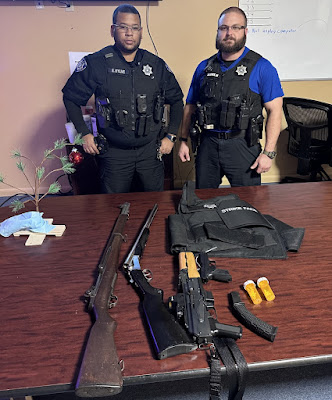 St. Tammany Parish Sheriff's Office Deputy Eddie Sylve and Deputy Matthew Schenck are being commended by Sheriff Randy Smith after they located illegal drugs and weapons while investigating a suspicious vehicle during a routine patrol over the holiday weekend.

At approximately 10 p.m. on December 30, the two deputies from the Criminal Patrol Division were conducting a routine patrol in the Covington area, when they observed a grey Nissan Altima occupied by two individuals sitting in the driveway of a closed business in the 6100 block of Pinnacle Parkway.

While speaking with the driver, they observed that he was wearing a bullet proof vest. They also observed a white pill on the driver’s side floorboard and a pistol on the back seat on the vehicle.

Through their investigation, deputies determined no charges would be brought against the passenger and she was released from the scene.

“Thanks to some alert deputies and proactive policing, these weapons and illegal narcotics were taken off the streets,” Sheriff Randy Smith said. “I commend both of these deputies for taking the extra steps to investigate when they observed something suspicious.”