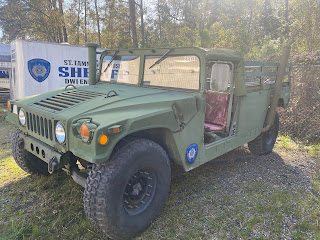 Tuesday (December 6, 2022) morning two employees with the St. Tammany Parish Sheriff's Maintenance Department were walking around the back of the jail when they observed a man climb into the driver’s seat of a marked STPSO Hummer, which was parked behind the jail.

When the two employees approached the man and asked what he was doing, he told them he was a lieutenant with the STPSO Narcotics Division, and he was taking the hummer to be serviced.

Knowing this information to be false, the STPSO employees alerted a nearby supervisor with the STPSO Operations Division who took the man, 52 year-old Pete Dunhurst of Covington, into custody and called for a patrol deputy to make a report.

The patrol deputy who responded knew Dunhurst, having arrested the man last month when he was caught breaking into a residence near Covington. He claimed to be a lieutenant with the STPSO Narcotics Division during that incident as well.

STPSO reports that Dunhurst is not employed and has never been employed with the St. Tammany Parish Sheriff’s Office or any law enforcement agency.

To add to his problems, Dunhurst was found to be in possession of a pistol with an obliterated serial number. Dunhurst was arrested and booked into the St. Tammany Parish Correctional Center on the charges of Vehicle Burglary, Impersonating a Law Enforcement Officer, and Possession of a Firearm with an Obliterated Serial Number.