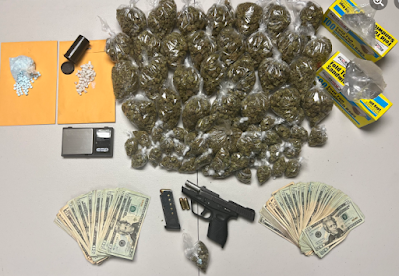 On Tuesday (December 13, 2022), in the early morning hours, the  Covington Police Department's Narcotics Unit and Louisiana Probation & Parole’s Tactical Unit conducted a joint operation on 1115 N. Columbia Street which has been investigated for illegal narcotics sales over the last several months.

While officers were searching, a black male subject, later identified as 24 year-old Marrio Haynes, Jr. (B/M), arrived at the residence unaware that a search was being conducted. When Haynes met officers in the backyard, Haynes fled on foot. After a lengthy foot pursuit, officers were able to detain Haynes where the following items were located on his person: Fentanyl Pills, Marijuana, and a loaded pistol

Bedford and Haynes were booked on numerous drug and weapons charges.

The Covington Police Department expressed their thanks to the Louisiana Probation & Parole’s Office for their assistance in this operation and also their Narcotics Division for their dedication and proactive work in making our community safer.

“Today, some of the drugs taken from this operation have been proven to kill. Illegal drug sales have also proven to provoke gang activity and gun violence, none of which the Covington Police Department will tolerate. Let this serve as a warning to other drug dealers in the City of Covington. We are a proactive unit, and eventually, you will be caught”. - Chief Ferrell