Disturbance 1. Tropical Storm Lisa is expected to weaken to a tropical depression later today. No threat to our area or the rest of the United States.

Disturbance 2. A large non-tropical low pressure system is expected to develop this weekend over the northeastern Caribbean sea and southwestern Atlantic. Environmental conditions could support gradual subtropical or tropical development beginning early next week while it moves generally northward or northwestward. Formation chance through 48 hours...low...near 0 percent and formation chance through 5 days...low...30 percent. Should be no threat to our area but could affect portions of the eastern United States.

Disturbance 3. A weak non-tropical area of low pressure is located a few hundred miles east of Bermuda. Environmental conditions are expected to be marginally conducive for slow subtropical or tropical development of this system during the next few days as it moves slowly southward today and then turns westward by the weekend. The disturbance is expected to merge with a larger system developing to its southwest by the end of the weekend and further development is not anticipated at that time. Formation chance through 48 hours...low...10 percent and  formation chance through 5 days...low...10 percent. No threat to our area or to the rest of the United States.

Disturbance 4. Hurricane Martin is racing north-northeastward as it intensifies into a large and powerful cyclone. However, Martin is no threat to our area or the rest of the United States. 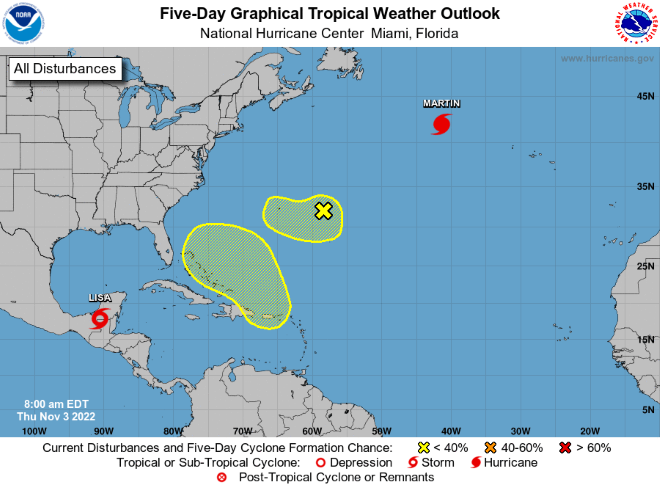