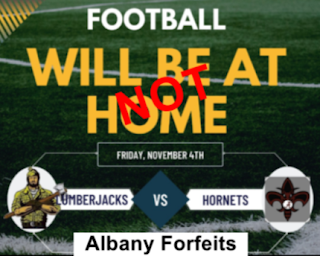 Bogalusa Mayor Wendy Perrette on Tuesday (November 1, 2022) evening said she is disappointed at the decision of Albany High School to forfeit rather than play against Bogalusa High School this Friday. Perrette issued the following statement.

Last week, the Louisiana High School Athletic Association (LHSAA) decided the game would be played at a “neutral” location, but Perrette worked with law enforcement and education officials to enact a security plan to alleviate LHSAA and Albany High School concerns.  Yesterday, all involved signed an agreement to activate that plan, since the initial decision had been based on safety concerns, and LHSAA reversed its decision.  Late today, Albany High School leaders announced their decision to forfeit.

Concerns stemmed from the Oct. 14 shooting death of a 15-year-old Covington boy outside the BHS stadium during the school’s Homecoming game.  The victim was also one of the gunmen, had a criminal record, was wanted on outstanding warrants, and was neither a Bogalusa resident nor a BHS student.

“It’s unfortunate and it’s frustrating that our extensive efforts to address security concerns are being disregarded,” Perrette said.  “Our student athletes should have this final game of the season on their home field, with Senior Night being celebrated.  I remain committed to the safety of our city and to the students of BHS – my alma mater.  If nothing else, this situation has led to the implementation of a safety plan that will protect our students, athletes and community.”

Mayor Perrette advised the City Council shortly after learning of the forfeiture.