Disturbance 1. East of the Windward Islands – No threat to our area

A broad area of low pressure located near the southern Windward Islands has not become any better organized since yesterday.  However, upper-level winds are forecast to become more conducive for development and a tropical depression is likely to form over the next several days if the system remains over water while moving generally westward at about 15 mph over the southeastern and southern Caribbean Sea.  Heavy rainfall with localized flooding, as well as gusty winds to gale force, are expected over portions of the Windward Islands, northern portions of South America, and the ABC Islands during the next couple of days. Formation chance through 48 hours...medium...60 percent and formation chance through 5 days...high...80 percent.

Disturbance 2. Tropical Depression Twelve – No threat to our area

Tropical Depression Twelve is about 480 miles west of the Cabo Verde Islands and moving northwestward at 8 MPH with 35 MPH sustained winds. There are no coastal watches or warnings in effect. 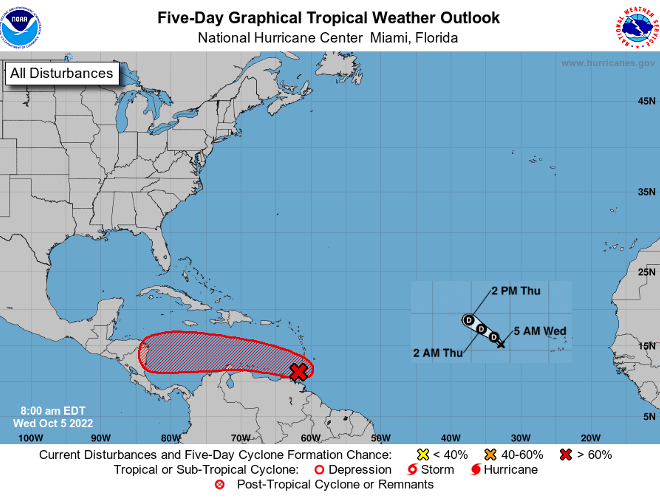