Disturbance 1. East of the Windward Islands – Possible threat to our area

A tropical wave is located several hundred miles east of the southern Windward Islands. Some further development of the wave is possible, and a tropical depression could form within the next few days while it moves generally westward at 15 to 20 mph, reaching the Windward Islands and the eastern Caribbean Sea by midweek.  Formation chance through 48 hours...low...30 percent and formation chance through 5 days...medium...40 percent.

Disturbance 2. Eastern Tropical Atlantic – No threat to our area

An elongated area of low pressure is located a few hundred miles south-southwest of the Cabo Verde Islands. Environmental conditions are forecast to be favorable for some gradual development, and a tropical depression is likely to form around the middle part of this week.  Further development will become less likely by the end of the week due to increasing upper-level winds. The system is forecast to move westward, then turn northwestward or northward by the end of the week over the eastern tropical Atlantic. Formation chance through 48 hours...medium...50 percent and formation chance through 5 days...high...70 percent. 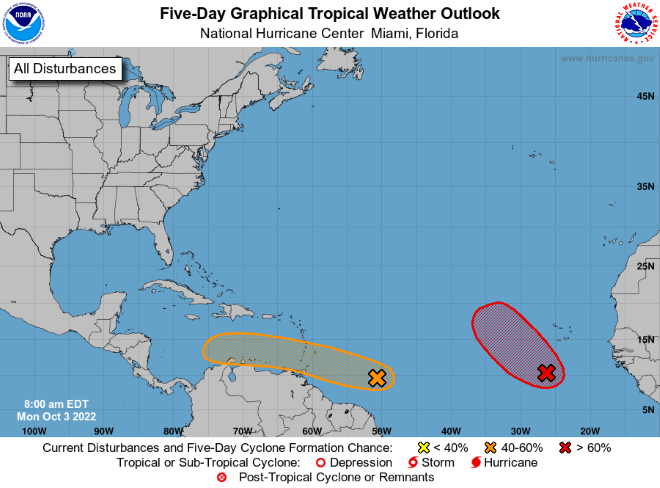