TPSO Arrests 3 After Shooting at Deputies and Wounding K9 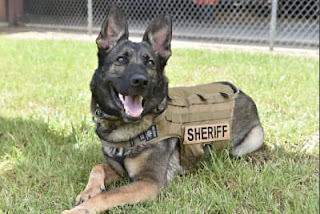 Just before 10:00 PM Saturday (October 1, 2022) night, the TPSO received several calls about two suspicious males walking around with a gun in the Bedico Creek Lane trailer park off CC Road in the Bedico Community east of Ponchatoula. Shortly after arriving in the area, deputies located the subjects and almost immediately began taking gunfire. While one deputy attempted to detain 52 year-old James Loyd, a K9 apprehension was attempted, at which time the other subject, 21 year-old Thomas Loftis, brandished a handgun and fired numerous shots, striking K9 Bella in the jaw.

After deputies returned gunfire, the two subjects fled into the woods.

Loyd and Loftis were located about 1/4 mile away where they had barricaded themselves inside a camper on CC Road. The TPSO Special Response Team (SRT) responded along with the Hammond Police Department and Louisiana State Police SWAT teams and began negotiation efforts. A female, identified as 73 year-old Charlotte O'Reagan, exited the home and told deputies to "come back tomorrow". When further negotiations gave negative results, a chemical agent was deployed into the camper at which time all three subjects exited and were taken into custody just after 2:00 AM Sunday (October 2, 2022) morning.

"This incident could have ended much worse, and for that we are truly blessed that our deputies are safe and unharmed", says Chief Travis. "K9 Bella also put her life on the line last night to protect her partner. She performed her duties flawlessly and took a suspect's bullet which may have been intended for one of our deputies. While we expect her to make a fully physical recovery, it's our hope she will also return to duty as some K9s are unable to do so after an injury involving gunfire. We love our K9s as members of the TPSO family and wish K9 Bella a speedy return to health.

K9 Bella was transported to MedVet in Mandeville where she was treated for her injuries which thankfully were minor. The extent of damage from her gunshot wound was soft tissue only, and there was no evidence of tooth or bone damage. She is expected to make a full recovery. A special thanks to the Hammond Police Department, Louisiana State Police, and B.B Rayborn Correctional Center for their persistent assistance throughout this incident, and also to the veterinarian staff at MedVet for their urgency in caring for K9 Bella.”

*All persons accused of a crime are considered innocent until proven guilty.