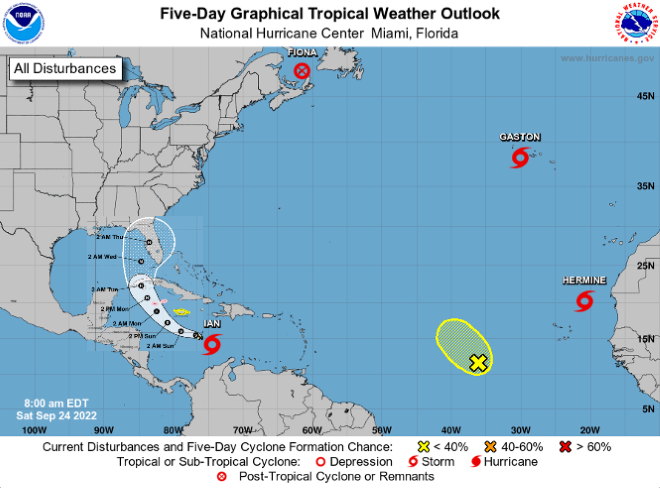 Disturbance 1. Tropical Storm Ian – Keep a close eye on this one

Tropical Storm Ian is located about 300 miles south-southeast of Jamaica with sustained winds of 45 mph. Ian is currently moving west-southwest at 15 mph. Ian is expected to turn westward to west-northwestward early Sunday, then northwest late Sunday, then north-northwestward late Monday. Ian is forecast to move across the central Caribbean today, Jamaica on Sunday, Cayman Islands Sunday night, and Cuba on Monday. Ian is currently forecast to make landfall on the Florida peninsula Wednesday or Wednesday night as a major hurricane. Confidence: There is normal confidence in the short-term forecast regarding TS Ian and lower than normal confidence in the forecast beyond Monday. While less likely than the current forecast track, there are still several possible tracks farther to the west, so please continue to monitor the forecast for changes over the next few days.

Disturbance 2. Post-Tropical Cyclone Fiona - No threat to us

Disturbance 3. Central Tropical Atlantic – Not likely to be a threat to us

A broad area of low pressure is located several hundred miles west-southwest of the Cabo Verde Islands. Despite unfavorable upper-level winds, some slow development of this system is possible over the next several days while it drifts northwestward or northward over the central tropical Atlantic. Formation chance through 48 hours...low...20 percent and formation chance through 5 days...low...30 percent.

Disturbance 4. Tropical Storm Gaston - Not likely a threat to us

Tropical Storm Gaston is located just west of the central Azores moving west-southwest at 7 mph with maximum sustained winds at 50 mph. Gaston is expected to turn to the west today, followed by a turn to the southwest late Sunday. Gradual weakening is forecast over the next few days and should become a post-tropical cyclone later today.

Disturbance 5. Tropical Storm Hermine – Not likely a threat to us

Tropical Storm Hermine is about 360 miles northest of the Cabo Verde Islands with maximum sustained winds of 40 mph. Hermine is expected to turn northeast late Sunday and then to the northwest by Monday night. Hermine could become a remnant low on Monday. There are no coastal watches or warnings in effect.