Disturbance 1. Tropical Depression Nine - Keep an eye on this one

Tropical Depression Nine is expected to approach Jamaica and the Cayman islands as an intensifying tropical storm. The system is forecast to approach western Cuba and enter the southeastern Gulf of Mexico. The eastern Gulf Coast should closely monitor this system; however, forecast uncertainty is fairly high.

Disturbance 2. Hurricane Fiona - No threat to us

Disturbance 3. Tropical Storm Gaston - No threat to us

Tropical Storm Gaston is bringing tropical storm conditions to the Azores and is moving east-southeast at 7 mph. A turn to the south is forecast for tonight and then a turn southwestward and early Saturday. Gradual weakening is expected over the next few days.

Disturbance 4. Central Tropical Atlantic – No threat to us

A broad area of low pressure is located several hundred miles west-southwest of the Cabo Verde Islands. Some slow development of this system is possible over the next several days while it drifts northwestward or northward over the central tropical Atlantic. Formation chance through 48 hours...low...20 percent and formation chance through 5 days...low...30 percent.

Disturbance 5. Eastern Tropical Atlantic – No threat to us

An area of low pressure located between the Cabo Verde Islands and the west coast of Africa is showing increased signs of organization. Environmental conditions are forecast to be generally conducive for further development during the next day or so, and a tropical depression is likely to form while the system moves northward at about 10 mph, roughly parallel to the coast of west Africa. Formation chance through 48 hours...high...80 percent and formation chance through 5 days...high...80 percent. 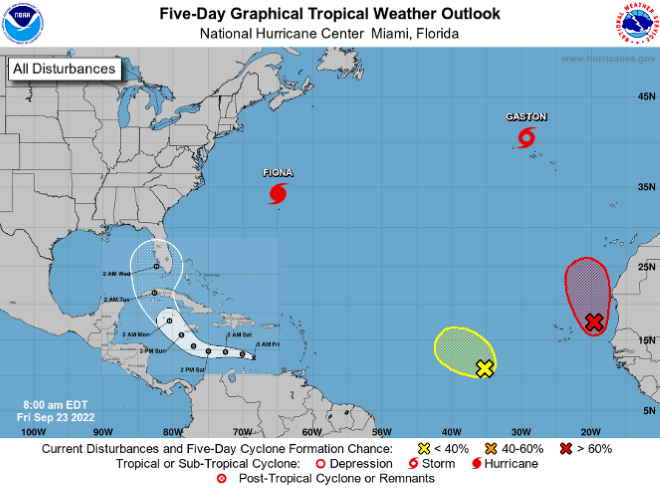