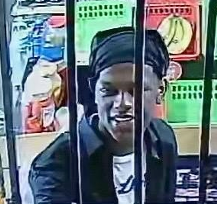 Slidell Police are investigating a carjacking incident and are asking for your help with identifying a person of interest.

Late Tuesday (September 6, 2022) night around 10:30pm, Slidell Police responded to the 2500 block of Old Spanish Trail in reference to a carjacking, which had just occurred. The victim was in the drive-thru line at a local fast food restaurant and rolled his window down to place an order. A vehicle abruptly pulled in front of the victim’s vehicle, which was a 2022 Hyundai Palisade, and three (3) males jumped out with guns, forcing the victim out of his vehicle. The three males fled in the victim’s Hyundai, as well as their original vehicle (which was later determined to be stolen Audi sedan).

Shorty after the incident, Slidell Police officers located the stolen Hyundai vehicle on Michaud Boulevard in New Orleans East. When the suspects spotted Slidell Police, they fled in the stolen vehicle and eventually crashed into a fence. Three suspects fled on foot and were able to elude capture.

Since the incident occurred, Slidell Police have worked closely with the New Orleans Police Department and the Federal Bureau of Investigations (F.B.I.) Violent Crimes Task Force. Investigators believe the individuals responsible for the carjacking in Slidell are the same individuals who have committed a rash of carjackings in New Orleans, and potentially Jefferson Parish. A person of interest has been developed and is believed to be involved in several of the carjacking incidents. Anyone with information on the identity of the person of interest is asked to call Crimestoppers at 504-822-1111. You can remain anonymous and may be eligible for a cash reward, if your tip leads to an arrest.