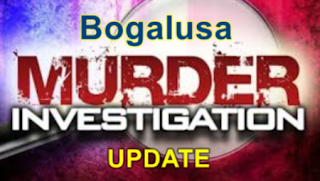 The Bogalusa Police Department has advised that Bogalusa Detectives identified and located the vehicle used in the drive-by shooting Tuesday (August 23, 2022) that left 50 year-old Veronique Allen dead at 1421 Main Street in Bogalusa, Louisiana.

Surveillance video in the area captured the vehicle as the shooting took place. More video evidence was gathered and the license plate number was obtained. The vehicle was registered to a subject in western Louisiana, and had been reported stolen early Tuesday. Detectives began tracking the vehicle as it travelled west on Interstate 12, and police agencies in the southwestern portion of the state were contacted. The Lafayette Parish Sheriff’s Office located the car and a pursuit was initiated. The suspects evaded police long enough to abandon the car and they escaped on foot. Although they have not yet been located, valuable evidence was left behind.

Bogalusa Detectives travelled to Lafayette Parish Tuesday night to continue the investigation. The vehicle is being processed, and BPD is confident that the suspects will eventually be identified.

Bogalusa Mayor Wendy Perrette praised the quick response of law enforcement and asked for the community to remain calm after an apparent drive-by shooting this morning (August 23, 2022) that resulted in the death of a 50 year-old Bogalusa woman.

According to preliminary information, the victim was an innocent bystander and not an intended target when the shots were fired in the 1400 block of Main Street.

Bogalusa Police report that several people were inside the residence at 1421 Main Street and that 50 year-old Veronique Allen was deceased when police arrived on the scene. BPD further states that detectives are following several leads and that anyone with information is asked to call the Bogalusa Police Detective Division at (985) 732-6238.

“We have had enough violence in Bogalusa, and I call on every citizen to cooperate with police while they investigate this horrible crime,” Perrette said. “The devaluing of human life in the name of the drug trade and gang allegiances should never happen anywhere, and the people of our community are fed up.”

“Bogalusa P.D. can’t do it alone,” the Mayor said. “We need every citizen to stand up, step forward, and unite against crime. We need to seek rational, lawful means to resolve disputes, and never resort to violence. We need our faith community to stand resolutely in reminding people that we worship a God of peace – a God who calls upon all of us to play a role in stemming the tide of violence.”

Perrette remains quarantined at home after testing positive for COVID-19 on Sunday.