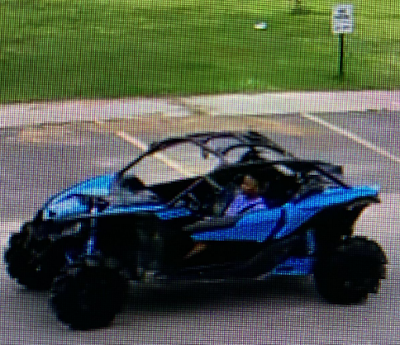 Slidell Police have arrested a 14-year-old juvenile from Slidell. SPD reports that after posting a photograph of the ATV on social media, several tips led officers to a residence in the Oak Harbor area. The suspect was identified late Wednesday night, and warrants were issued for his arrest. Around 3:00 PM this afternoon, the juvenile was placed under arrest and charged with:

▪️Aggravated Flight from an Officer

▪️Aggravated Obstruction of a Highway

▪️Reckless Operation of an Off-Road Vehicle

▪️Operating an Off-Road Vehicle on a Public Roadway.

Chief Randy Fandal would like to thank all of the citizens for their tips and continued support of the Slidell Police Department.

Slidell Police are on the search for a suspect after they led officers on an early Wednesday (August 3, 2022) evening high-speed chase, leaving one officer injured. Shortly after 5:30pm, a Slidell Police detective observed a blue Can-Am Maverick X3 (an off-road ATV) driving recklessly though the busy Fremaux Town Center by running vehicles off the road and traveling at speeds upwards of 80 miles per hour. As officers tried to stop the vehicle, the driver fled, leading multiple Slidell Police officers on a chase through the city. The suspect eluded officers by taking his vehicle off-road (along a levee near Oak Harbor) and cut through to Interstate 10…where officers ultimately lost sight of the off-road vehicle. During the chase, an officer was involved in a crash, resulting in the officer having to go to a local hospital. The extent of the officer’s injuries were not immediately available at the time of this release; however, are minor in nature and not life threatening.

Slidell Police are asking for your help with identifying the suspect. He is described to be a light skinned, African American male, in his late teens – early 20’s, with short dreadlock style hair. Slidell Police believe the suspect lives in the Slidell area.

Slidell Police Chief Randy Fandal says, “During the last several months, we've had several issues with these types of vehicles driving reckless around our city, causing issues, and putting innocent lives in danger. We ARE NOT going to tolerate it here. I can assure you we will find this individual, and he will face some very serious charges. And for anyone else who thinks they are going to be copycats and cause issues with these off-road vehicles, let me be the first to tell you that we will have zero-tolerance. Expect to go to jail and have your vehicle impounded. Period.”