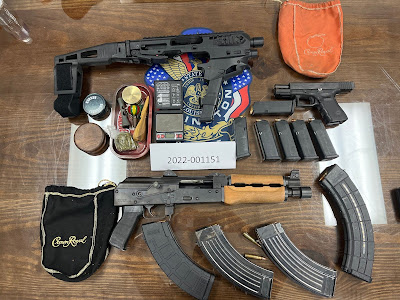 Thursday (August 25, 2022) night, officers with the Covington Police Department conducted a traffic stop on a vehicle for equipment violations and discovered an AK-47 and Glock pistol, 225 rounds of ammunition, marijuana, and drug paraphernalia in the vehicle. The driver of the vehicle, 47 year-old Shefflan Washington of New Orleans, was found to be a convicted felon with extensive criminal history.

Washington was charged with Possession of a Firearm or Carrying Concealed Weapon by a Person Convicted of Certain Felonies (2 counts), Possession of Schedule 1 (Marijuana), and Possession of Drug Paraphernalia.

Covington Police Chief Ferrell stated, “Since June 2021, your police department has removed 46 illegally possessed firearms off the streets of Covington. Every citizen in the City of Covington deserves to live in a city where they do not have to live in fear of gun violence. While we may not know what Mr. Washington’s plans were yesterday evening, we are thankful he crossed our path.

We would like to thank our CPD Patrol Division for their continued dedication to making sure the streets of Covington are safe.”