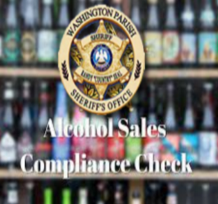 On July 29, 2022, the Sheriff’s Office once again conducted a JUDE operation by using a juvenile to attempt to buy alcohol at twenty-three parish business establishments. Only one parish business sold alcohol to a juvenile on July 29. A clerk at Chevron on Highway 21 in Varnado was cited for selling to an underage customer. This was the second offense for that business in a period of less than three months, with the first citation being issued in late May.

Four parish businesses which previously sold alcohol to a juvenile were revisited during the July 29 operation. Those four businesses requested proper identification and refused to sell alcohol to the juvenile.

“Out of twenty-three businesses visited on July 29, only one sold alcohol to a minor,” stated Sheriff Randy Seal. “While that is a low percentage, it is still one too many. The vast majority of parish business establishments which are licensed to sell alcohol do so in a responsible manner. I congratulate them and their clerks for demonstrating integrity and honesty.”