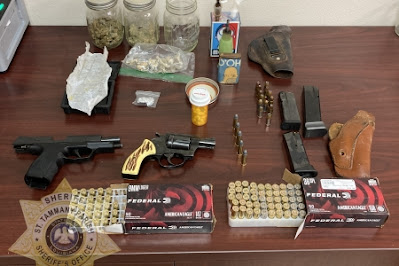 A Kansas couple was arrested July 6, 2022 by the St. Tammany Parish Sheriff’s Office after drugs and a stolen gun were found during a traffic stop. The driver of the vehicle was identified as 26 year-old  Johnathan M. Hutchings. The vehicle was also occupied by a front seat passenger and the registered owner of the vehicle, 23 year-old Rebecca R. Gill.

Hutchings was placed under arrest and booked into the St. Tammany Parish Correctional Center numerous narcotics offenses, a weapons charge, traffic charges, and as a fugitive.

Gill was placed under arrest and booked into the St. Tammany Parish Correctional Center on numerous narcotics offenses and a weapons charge.

Detectives later discovered that the 9mm pistol that was located inside the Dodge Charger was reported as stolen through Johnson County, Missouri.   As a result, arrest warrants were obtained for Hutchings and Gill for an additional charge of Illegal Possession of Stolen Firearms.