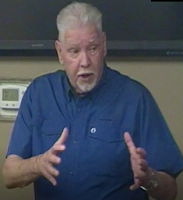 Dr. Charles T. Kelly, Jr., a resident of Bogalusa and 37- year law enforcement veteran, was appointed Chairman of the Crime Prevention Commission at the Tuesday (June 7, 2022) meeting of the Bogalusa City Council. The Commission will be composed of nine members (appointed to two year terms) plus the Mayor and Police Chief. The Commission is to serve as an advisory body whose purpose will be to advise the City Council on matters pertaining to the reduction of crime, to assist the police department and other law enforcement agencies, and to generate citizen support and participation in effective community crime prevention programs. Persons interested in serving on the Commission should contact their Councilperson or via email to the Bogalusa city council office attention Brenda.ford@bogalusa.org.

Hopefully, the steps being taken to create and organize the Crime Prevention Commission will lead to effectively addressing and reducing the level of crime that exists in the City. Appointing Dr. Kelly, an extremely qualified professional, and organizing the Commission's membership are important first steps. Everyone wants a safer City. Again, hopefully, the Commission, the Police Department, the Sheriff's Office, the Council, and the Mayor can effectively work together to find answers.

Following action on mostly routine matters on the Agenda, the Council heard from a number residents during Public Participation (beginning at 20:45 into video of the meeting), regarding various problems. Of particular note is unresolved problems at Bogalusa Cemetery that includes exposed vaults and maintenance. Council members, the Mayor, and the Public Works Director responded to the issues.

Following remarks by the Council, the meeting was adjourned.