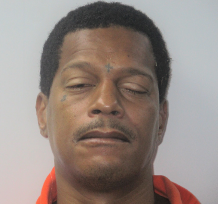 Tuesday (May 3, 2022) morning, Washington Parish Sheriff’s Office deputies responded to a report of a vehicle which had left the roadway on Highway 10 west of Bogalusa and was now disabled in the woods. Arriving on the scene, deputies discovered the driver of the vehicle, Isaac G. Sabatier, age 38 and a resident of Music Street in New Orleans. Northshore EMS was on the scene and offered a medical assessment to Sabatier who refused medical assistance.

During the investigation of the wreck, deputies discovered a quantity of illegal drugs in Sabatier’s possession. Sabatier, who had a suspended driver’s license, no license tag, no insurance and no vehicle registration, was found to be in possession of marijuana, powder cocaine and crack cocaine. A back pack belonging to Sabatier was searched and yielded a set of scales, plastic baggies and $303 in cash.

Sabatier was taken into custody, at which time deputies noticed he seemed to have something in his mouth. He was forced to spit out the items in his mouth which consisted of twelve baggies, five of which contained heroin and seven of which contained cocaine. At that time, Sabatier stated he had swallowed some of the narcotics, so he was transported to Our Lady of the Angels Hospital for medical assessment. While at the hospital, additional marijuana was discovered in a plastic tube which was concealed in Sabatier’s rectum.

After being cleared at the hospital, Sabatier was transported to the Washington Parish Jail and booked on charges of three counts of possession with intent to distribute illegal drugs, possession of marijuana, possession of drug paraphernalia, obstruction of justice by evidence tampering, reckless operation of a motor vehicle, no proof of registration and driving while under suspension.

“It is not unusual for drugs to enter Washington Parish from the New Orleans area,” stated Sheriff Randy Seal. “This time didn’t work out for you, Mr. Sabatier. Welcome to the Washington Parish Jail and I hope you enjoyed your encounter with our diligent deputies.”