Suspects Stole $5000 and 270 Cartons of Cigarettes in Independence 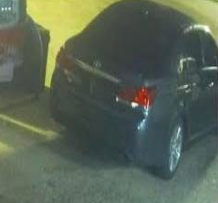 The Tangipahoa Parish Sheriff's Office is asking for the public's assistance in identifying the suspects of a business burglary which occurred in Independence at around 5:00 AM on Friday (May 13, 2022).

Deputies responded to a burglary alarm at the Black Cat Grocery in Independence and found that a brick had been thrown through the front door. It was discovered the suspects stole $5,000 along with 270 cartons of cigarettes. Of the cigarettes, 180 were loose cartons and the remaining 90 were split between three cases.

Security footage from the store captured a vehicle of interest parked at the gas pumps several hours before the burglary. The vehicle in question is a gray Toyota car, possibly a Corolla, and had no license plate.

TPSO Chief Jimmy Travis is asking anyone with knowledge of the incident or the vehicle to contact Crime Stoppers of Tangipahoa, Inc. at 1-800-554-5245. Detective Anthony Stewart is the lead investigator in this incident.