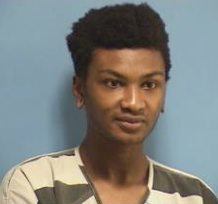 District Attorney Warren Montgomery reports that on Thursday (May 26, 2022), Nathaniel Peters a.k.a. “Nancy Peters,” age 27 of Covington, was found guilty by a jury of armed robbery with a firearm, possession of a firearm by a convicted felon and illegal possession of a stolen firearm.

In May 2021, the victim arranged to sell some computer equipment to Peters on Facebook Marketplace. On May 19, 2021, the victim and his friend met Peters in the parking lot of Harbor Freight on Highway 190 to complete the transaction. Rather than paying for the items, Peters pulled out a handgun, took possession of the items, told the victims to leave, and fled down St. Tammany Trace towards Abita Springs on a bicycle with the items. The victim and his friend were able to describe Peters' clothing (including a blue rain jacket), the firearm, and the bicycle he was riding. The victim also provided the police with Peter's Facebook page, Facebook messages he exchanged with the Peters and Peters' phone number.

The St. Tammany Parish Sheriff’s Office Major Crimes Division was assigned to investigate the case. Detectives used the phone number provided by the victim to identify the perpetrator as Nathaniel Peters, aka “Nancy Peters.” Peters was then positively identified by both the victim and his friend in a photographic lineup. On May 21, 2021, detectives located Peters riding a bicycle on the Trace and arrested him.

Peters provided a statement to the detective, admitting to robbing the victim at Harbor Freight. He provided information about the location of the firearm. Detectives brought Peters to the Trace and Peters revealed the location where he had buried the firearm in the same blue rain jacket the victim described him wearing at the time of the armed robbery. The firearm had been reported stolen a few weeks earlier from a residence in Lewisburg. Detectives then executed a search warrant at Peters' residence in Covington, where they recovered the victim’s computer equipment already installed on Peters' computer.

During the trial, defense counsel described Peters as a “child of God” who had experienced a tough life – being “transgender, poor, black and undereducated.” Defense counsel stated that the victims were telling a “big lie,” that Peters did not “take” the property, he was “given” the property and that he had not shown his firearm on the scene. “How the defendant ‘identifies’ should not be taken into consideration,” Assistant District Attorney Tiffany Dover stated to the jury. “A gun works the same way no matter whose hand it is in,” and that even a “child of God is responsible for his actions each day.” She also said during closing that Peters was intelligent enough to build a computer, communicate competently by text for computer parts, work out how to pull off this crime and then attempt to negotiate with police for a trade of information.

Dover reminded the jurors that the victim and his friend had positively identified the defendant and the gun very specifically and their statements were corroborated by all of the evidence - and were not, therefore “liars.” Dover said that the young victims (18 and 19 years old at the time) were traumatized by this incident and would “never meet a stranger in the same way again.”

Peters has two prior felony convictions and will be sentenced on July 13, 2022.