Another Big Drug Bust on I-12 in St. Tammany 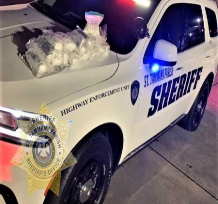 The St. Tammany Parish Sheriff’s Office has arrested a man after he was found transporting a large cache of illegal narcotics through the parish. Shortly after 9 p.m. Monday (May 9, 2022). a deputy with the STPSO Highway Enforcement Unit conducted a traffic stop on a Subaru Legacy which was traveling eastbound Interstate 12.

The driver and sole occupant of the vehicle, 33 year-old Guillermo Zepeda, reportedly admitted to possessing a THC vape pen within the vehicle. The deputy also observed an open package of pills, which was later determined to include a tablet of Diazepam (Valium), in plain view on the center console.

Zepeda is believed to have been traveling through St. Tammany on his way from Arizona to Florida.