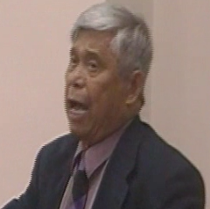 Following Public Hearings on three previously-introduced ordinances, the Washington Parish Council met at 6:00 PM on Monday (April 11, 2022). The majority of the meeting (31 minutes) was devoted to Washington Parish Coroner Roger Casama's request for funding (beginning at 5:00). However, Dr. Casama's presentation included few, if any, specifics on how much funding is needed or how it will be used. Funding would be generated from a tax millage that ultimately would have to be approved by the voters.

The Coroner's Office has been plagued for years with a shortage of funding. The Office has relied on other agencies to perform autopsies; at times, owing substantial amounts to those agencies. The Council generally expressed support for additional funding for the Coroner's Office and encouraged Dr. Casama to provide a detailed plan to support his request.

In other business, he Council

It was noted that Washington Parish Government laid 2,020 tons of asphalt in Bogalusa during March. Also, the sidewalk project in Franklinton, replacing the sidewalks on both sides of Main Street from downtown to the Fairgrounds, will begin soon.