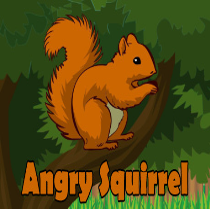 Slidell Police has reported that yesterday (April 26, 2022), SPD responded to a squirrel attack in progress. The caller stated that “a 78-year-old elderly man was actively being attacked by a squirrel, who was eating his hand. The man was attempting to choke the squirrel, but was unable to obtain a good grip.”

First responders arrived and observed the elderly gentleman still struggling with the vicious squirrel. The squirrel was eventually subdued and died as a result of its injuries.

The gentleman was transported to a local hospital to be treated for his injuries, some of which were pretty significant. The gentleman is expected to make a full recovery.

It was discovered that the man was walking around outside of his home, when the squirrel came from the direction of his roof and attacked him (unprovoked).

SPD further reports that “it is difficult to find statistics on squirrel attacks. According to the experts, it is very rare for squirrels to attack people, but there have been documented cases of squirrels attacking and biting people and pets sometimes severely enough to cause injury. A diseased squirrel may be more likely to show aggressive or hostile behavior towards human beings. However, when a squirrel does attack, it is not always possible to determine why. This is the second reported squirrel attack in Slidell, this year. The first occurred in February, during a Mardi Gras parade.”