Woman Steals Car an Hour After Being Released From Jail 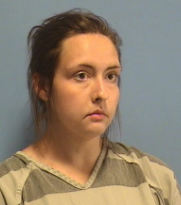 Sarah Connors, age 27 and a New Jersey resident, is facing more charges after she stole a car less than an hour after being released from the St. Tammany Parish Correctional Center. Connors had been  released at approximately 3:45 p.m. Monday (March 28, 22) on a signature bond after she was booked by Mandeville Police on misdemeanor theft and drug charges.

Then at approximately 4:45 p.m. Monday (March 28, 2022), the St. Tammany Parish Sheriff’s Office was contacted in reference to a red Chevy Camaro, which had been stolen after it was left running outside a fast food restaurant near the intersection of US Highway 190 and Louisiana Highway 25 in Covington.

Deputies located the Camaro headed southbound on U.S. 190 near Holiday Boulevard and gave chase. The vehicle continued southbound, sideswiping another car before deputies located it crashed off the Fairway Drive exit. The driver, you guessed it, was Sarah Connors who sustained serious injuries in the crash and was transported by emergency medical personnel to a local area hospital, where she remains.

The case is still under investigation, and charges are pending.