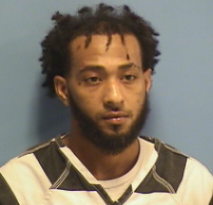 A St. Tammany Parish Sheriff’s deputy was injured after he was struck by a car during a pursuit Saturday (March 12, 2022) afternoon.

At approximately 1 p.m. Saturday, a STPSO deputy patrolling the area of Louisiana Highway 36 near Covington observed a white Dodge Hellcat without a license plate and attempted a traffic stop.  The vehicle failed to stop, continuing westbound on La. 36 before turning onto U.S. Highway 190 near Claiborne Hill. Covington Police units joined the pursuit as the Hellcat continued down U.S. 190 and onto westbound Interstate 12. Near the Louisiana Highway 21 exit, a STPSO deputy deployed spike strips in an attempt to stop the pursuit. The driver of the Hellcat swerved to miss the spikes and struck the deputy with the passenger-side of the Hellcat. The driver continued on I-12, exiting at Louisiana Highway 1077.

Deputies located the vehicle in a nearby Rouse’s parking lot, and witnesses informed them the driver had entered the store. As the driver, 24 year-old Kody McElveen of Abita Springs, exited Rouses, he observed the deputies waiting outside, and he ran. Deputies apprehended McElveen in the parking lot, at which time he was found to be in possession of a firearm.

McElveen was booked into the St. Tammany Parish Correctional Center for Attempted Murder of a Police Officer, Aggravated Assault with a Motor Vehicle Upon a Peace Officer, Illegal Possession of a Firearm, Aggravated Flight from an Officer, Reckless Operation, Possession of Schedule I (marijuana) and six counts of Failure  to Stop or Yield.

The injured deputy was taken a local area hospital and treated for minor injuries.

“This is an example of how dangerous our deputies’ jobs are,” Sheriff Randy Smith. “I am thankful this deputy sustained only minor injuries. It could have been much worse.”