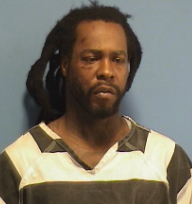 The driver, who was later identified as Warren Patterson, age 37 and of Pearl River, led the detectives on a slow-speed pursuit onto Son Moore Road, where he eventually abandoned his vehicle and fled into the wood line. STPSO detectives gave chase into the woods, at which point Patterson was observed removing a firearm from his waistband and discarding it onto the ground in front of him. While detectives were attempting to take him into custody, Patterson continued to be physically resistant and fought the detectives. After a struggle, he was taken into custody and escorted out of the woods.

During a search of Patterson’s vehicle, detectives located approximately 57.1 grams of suspected cocaine (both powder and crack), a digital scale and $2,158 believed to be the proceeds from narcotics sales.

Patterson was arrested and booked into the St. Tammany Parish Correctional Center for the offenses of Possession of a Firearm in the Presence of a CDS, Possession with the Intent to Distribute Schedule II CDS (Cocaine), Resisting with Force or Violence, Proceeds Relevant to a Drug Transaction, Resisting an Officer, Possession of Drug Paraphernalia, Obstruction of Justice, Driver Must be Licensed, and Failure to use a Turn Signal (two counts).