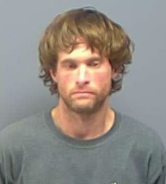 Tangipahoa Parish Sheriff's Office Chief Jimmy Travis reported today that, on March 3, 2022,  detectives arrested Daniel Holliday, age 32 and of Kentwood. Holliday was wanted on numerous failure to appear warrants and is a suspect in several thefts and burglaries in the northern parts of Tangipahoa Parish. Over the last several months, Holliday has fled from deputies several times to avoid his arrest.

All persons accused of any crime are assumed innocent until proven guilty.