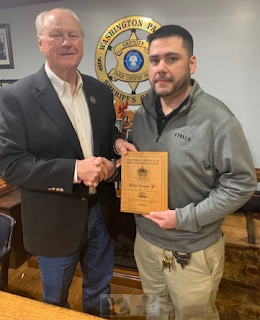 Washington Parish Sheriff’s Office Corrections Sergeant Barry Cooper recently graduated from the five day Elite Academy hosted by the National Institute for Jail Operations. The advanced training, focusing on legal, administrative and operational issues, was conducted in Midway, Utah. The intensive courses were taught by various instructors from throughout the nation.

Thirty-seven jail supervisors from twenty states were invited to attend. Sgt. Cooper was the sole representative from Louisiana. Cooper, a resident of Mt. Hermon, has been employed by the Sheriff’s Office for three years and conducts internal jail investigations as well as serving in an administrative capacity. He is a graduate of the Louisiana Peace Officers Standards Training Academy.

“What an honor for one of our own to be selected to attend the Elite Academy,” stated Sheriff Randy Seal. “Sgt. Cooper is one of many outstanding corrections deputies on our staff. Our corrections deputies have a very difficult job and seldom receive the recognition due them. I am so pleased that Sgt. Cooper was able to represent all of us at this advanced training.”