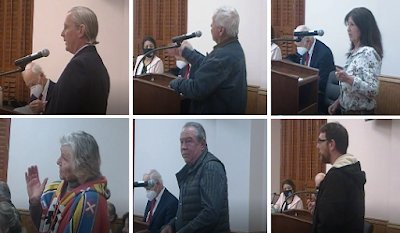 Entergy representative Patrick Hamby provided a final report (beginning at 2:00 into video of the meeting) on noise level mitigation efforts at their power plant outside of Bogalusa City limits. Hamby reported that the noise level has been reduced to around 45 decibels. The noise issue was first raised at an October, 2020 meeting of the Council. Complaints from residents near the plant were of noise levels in excess of 70 decibels. At the time, Calpine was the owner/operator of the plant and Entergy later took ownership of the plant. Aggressive action was requested and the Entergy representative committed to investigating and cooperating with the Council and residents to resolve problem. Entergy proceeded to investigate, made substantial investment in needed equipment, installed the equipment, and provided regular progress reports to the Council. The Council complimented Entergy on their efforts and indicated they were satisfied. Hamby thanked the Council and reiterated that Entergy is a “community partner” with Bogalusa and the Parish of Washington. Click here for previous related stories

Beginning at 8:00 into video of the meeting, the resolution to enter into a contract with Flowmotion Trail Builders, LLC for additional mountain bike trails at the Bogue Chitto State Park was considered and, ultimately, Council action on the resolution was postponed. At issue was conflicts with the mountain bike trails and horseback riding trails. Several persons who use the horseback riding trails spoke, with concerns of safety being prominent. The Council repeatedly advised that activities at the State Park is governed by the State – not the Council and that the Council encourages all to enjoy the State Park. The resolution before the Council was only to consider a $25,000 funding request. The Council postponed action to encourage a resolution of the conflict.

Administrative reports were provided beginning at 35:00 into video of the meeting.

Finance Director Donna Graham announced purchases to be made soon of needed equipment.

Donnell Merritt reported on work done by public work crews and described equipment obtained by Parish Government over the years to better serve the Parish.