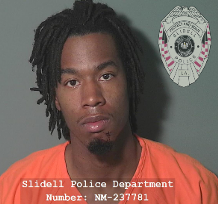 Matthew X. Wilcox, age 28 and of Hammond, is facing serious charges after escalating from a minor altercation at a Slidell bar, to committing a drive-by shooting.

Shortly before 1:00am Wednesday (January 26, 2022) morning, Slidell Police responded to the area of Carey St. and Cousin St. in reference to a report of several gun shots. When officers arrived, they were told a man, later identified as Wilcox, a convicted felon, had committed a drive-by shooting and fled the area in a white Dodge pickup truck.

An alert Slidell Police officer spotted the vehicle on Old Spanish Trail and conducted a traffic stop. Wilcox surrendered without incident. Officers located a firearm inside of Wilcox’s vehicle, as well as spent shell casings.

Earlier in the evening, it was discovered that Wilcox was involved in an altercation at a bar, located near the location of the shooting at Carey St. and Cousin St., and was asked to leave. Wilcox returned a short time later and fired several rounds at people standing near the street corner. Luckily, no one was injured.

Wilcox was arrested and charged with Felon in Possession of a Firearm. Warrants are pending for several additional counts of Attempted First Degree Murder. Wilcox is currently being held at the Slidell City Jail and will later be transported to the St. Tammany Parish Jail.