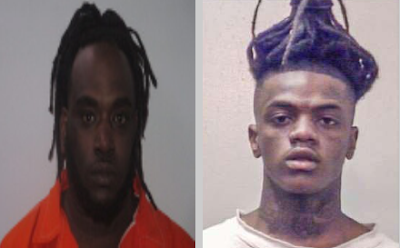 Walker was charged in a one-count indictment with possession of a firearm after having been convicted of a felony. According to court documents, on September 24, 2021, Walker, knowing he had previously been convicted of a crime punishable by imprisonment for a term exceeding one year, did knowingly possess a Taurus Model G2C 9mm pistol. Walker faces a maximum term of imprisonment of ten (10) years, a fine of up to $250,000.00, up to (3) years of supervised release following any term of imprisonment, and a mandatory $100.00 special assessment fee.

Scott was charged in a one-count indictment with possession of a firearm while under indictment for a felony. According to court documents, on October 29, 2021, officers with the Bogalusa Police Department executed a traffic stop on a silver-colored Audi bearing a Virginia license plate traveling south on South Columbia Street in Bogalusa, Louisiana because the vehicle possessed a switched license plate.  Scott, the driver of the vehicle, failed to provide his license or vehicle registration.  While speaking to Scott and the passenger, officers smelled a strong odor of marijuana in the vehicle.  The officers also observed a black handgun on the driver’s side floorboard directly beneath Scott's legs. Officers removed Scott from the vehicle and observed a small amount of suspected marijuana in the driver’s seat.  Officers then recovered a loaded Ruger Model Security-9, 9mm, pistol from the driver’s side floorboard. At the time that the officers located and seized the firearm from the floorboard, Scott  was under indictment for felony crimes, possession of a controlled substance and assault, in Harris County, Texas. Scott faces a maximum term of imprisonment of five (5) years, a fine of up to $250,000.00, up to (3) years of supervised release following any term of imprisonment, and a mandatory $100.00 special assessment fee.

U.S. Attorney Evans reiterated that the indictment in each case is merely a charging document and that the guilt of the defendant must be proven beyond a reasonable doubt.

These cases were investigated by the Bureau of Alcohol, Tobacco, and Firearms and the Bogalusa Police Department.  The prosecution is being handled by Assistant United States Attorney André Jones.