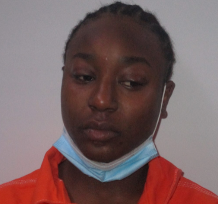 On Friday (December 10, 2021) morning, while entering the Franklinton town limits, a Washington Parish Sheriff’s Office deputy observed a vehicle traveling east on Highway 10 at more than 30 mph above the posted speed limit. When the deputy turned around to pursue the vehicle, the driver increased speed and passed several vehicles on a hill in a no passing zone as she approached the Highway 62 intersection, forcing other vehicles off of the road due to her careless driving.

Bogalusa Police Department was notified of the situation and asked to assist once the driver reached the city limits. When the driver observed other law enforcement vehicles, she attempted to change her course of travel, lost control of her vehicle and crashed into a utility pole guide wire, causing a break in the pole. She created more damage as she entered an adjacent area.

Once the vehicle was stopped, a Bogalusa Police Department officer attempted to remove the driver from the vehicle and he was met with forceful resistance. The woman was subdued, handcuffed and transported to the Washington Parish Jail charged with excessive speeding, aggravated flight from an officer, criminal damage to property and resisting an officer with force or violence.

Arrested was Patera Williams, age 21 and a resident of Mt. Olive Road in Mt. Hermon. When asked why she was driving at such an excessive speed and in such a careless manner, the woman stated she was trying to get to work.

“Highway 10 can be a dangerous road to navigate when any motorist is traveling at an excessive speed and in a careless manner,” stated Sheriff Randy Seal. “I caution all motorists to use caution when navigating our roadways and to always drive responsibility and to be aware of other vehicles on the road. I hope Ms. Williams’ stay in jail will give her time to reflect on her poor decision to drive in such a careless manner. This arrest should be a wake-up call for her to be a more responsible driver. I am grateful for our officers, along with Bogalusa Police Department officers, who were able to make this arrest and take this driver off the road.”