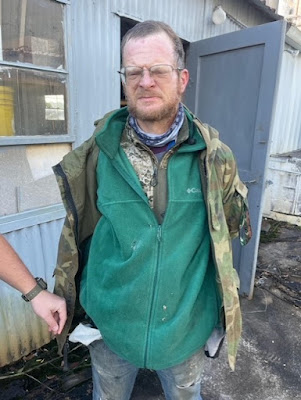 On Sunday (December 12, 2021) a Washington Parish Sheriff’s Office patrol deputy responded to Morris Cemetery just outside the Franklinton town limits to investigate a report of a suspicious vehicle parked on the property. Once he arrived at the scene, the deputy observed a vehicle parked off the north side of the cemetery near the wood line. A large pile of clothes was adjacent to the vehicle.

As the deputy exited his vehicle to investigate, he noticed the fence of the abandoned milk plant had been cut and tied back with black rope. He called for backup and another deputy arrived to assist. The deputies then followed a path made where tall grass had been beat down. As they followed the path, they observed several items which appeared to have been dropped along the way.

Approaching the milk plant, the deputies entered an open door and observed a quantity of milk plant items near the door. As the deputies cleared the facility one room at a time, they noticed a partially open door which led to an adjacent alley. They exited the building and encountered a male identified as Carey Samuel Gendron, age 44 and a resident of West 7th Street in Bogalusa. A search of Gendron’s clothing and a bag he was carrying revealed wrenches, pliers and black rope similar to the rope used to tie back the cut fence. In addition, Gendron was in possession of a small amount of illegal drugs. He was arrested and transported to the Washington Parish Jail where he was booked on charges of theft, criminal damage to property, criminal trespass, possession of illegal drugs, littering and contempt of court.

“Mr. Gendron needs to find another vocation,” stated Sheriff Randy Seal. “Pursuing a career of criminal behavior has not been lucrative for him. If indeed he enjoys being arrested and placed in jail, we are always willing to accommodate him. We would prefer, though, that he abandon criminal activity and join the ranks of responsible citizens.”