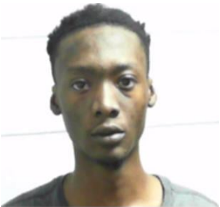 The Bogalusa Police Department reports that on Thursday (December 2, 2021), the Violent Crimes Task Force, along with members of the Criminal Patrol and Investigations Divisions, executed a search warrant at the residence of Kordarrius Mingo. Inside the residence Officers reportedly located Mingo and almost 3 pounds of marijuana, 4.8 grams of heroin, an amount of Schedule IV Narcotics, drug paraphernalia consistent with the packaging and sale of illegal narcotics, and a stolen 9mm handgun. Over $3,000 in cash, suspected proceeds of illegal narcotics sales, was also seized.

BPD notes that, on September 21, 2021, subsequent to an investigation by the Bogalusa Police Department Violent Crimes Task Force, Mingo was arrested and a search warrant resulted in the discovery of large quantities of various illegal narcotics and weapons at his residence. He was charged with a total of 18 violations, most being felony narcotics and weapons violations. Mingo was out of jail on bond at the time for a May 2021 felony domestic abuse battery charge.