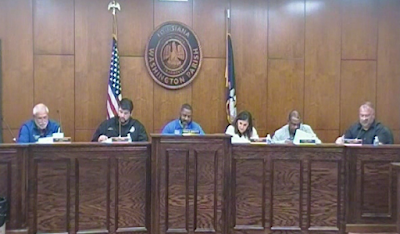 During the Monday (November 22, 2021) meeting, the Washington Parish Council received information and took actions regarding some major issues. First, noise abatement measures are complete at the Entergy facility near Bogalusa. Second, the draft of the proposed ordinance regulating solar panel projects is nearing completion. Third, debris cleanup following Hurricane Ida is complete with the exception of six stumps.

Entergy representative Patrick Hamby advised the Council (beginning at 6:55 into the video) that noise mitigation measures at the Entergy plant near Bogalusa are now complete and testing is planned for next week. The target noise level is 45 decibels.

The Council approved a resolution for a fourth extension (for 90 days) of the "moratorium on the approval or permitting of all solar panel farms or utility scale solar projects, commercial solar power plants or operations similar thereto". Prior to approving the resolution and beginning at 52:20 into the video, the Council was advised that the draft of the proposed ordinance was nearing completion. The draft of the proposed ordinance is being prepared by a group of four attorneys, each expert in their fields, retained by the Council. It was ultimately agreed that the draft would be provided to all interested parties and be brought to the Council at a special meeting. The Planning Commission and all interested parties will be invited. The ordinance will then be introduced followed by a Public Hearing and vote by the Council two weeks after introduction.

Parish President Richard Thomas (beginning at 1:10:00 into the video) commented on the recent ground-breaking of the Hwy. 3241 project (finally becoming a reality after 32 years), provided comments and described the recent Larry Wells Memorial Highway dedication ceremony at Mt. Hermon School as “wonderful”, remarked on the efforts expanding Highway 25 to a four-lane, and provided the latest COVID-19 statistics in the Parish.