Man Charged With Assaulting Girlfriend on Their Way to Bogalusa 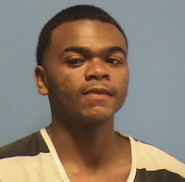 A Baton Rouge man has been arrested on assault and battery charges after he reportedly held a gun to his girlfriend’s head and threatened to kill her Tuesday (October 26, 2021) evening in St. Tammany Parish.

The St. Tammany Parish Sheriff's Office reports that at approximately 4:30 pm Tuesday, STPSO deputies were dispatched in reference to a couple who got into an altercation, which turned physical, while driving through St. Tammany Parish on their way to Bogalusa. Responding deputies learned the male driver, Jarmine Alexander (age 19 and of Baton Rouge), pulled over on Highway 59 near Mandeville and assaulted his girlfriend after the two got into an argument.

Alexander was taken into custody and booked into the St. Tammany Parish Correctional Center on one count of Aggravated Assault with a Firearm (Domestic Violence) and one count of Battery on a Dating Partner.

Deputies located the pistol used and some of Alexander’s clothing, where he discarded them behind a house on St. Ann Street in Abita Springs.